Jaipur, Evolution of an Indian City

Jaipur lies at a distance of about 200 miles from Delhi, 150 miles from Agra and 84 miles from Ajmer. Capital city of Rajasthan is located amidst the Aravali hill ranges at an altitude of about 430 m above sea level.

The eastern Rajasthan, lying to the east and south east of the Aravalli divide includes the modern administrative districts of – Udaipur, Chittorgarh, Rajsamand, Banswara, Dungarpur, Kota, Bundi, Baran, Jhalawar, Bhilwara, Ajmer, Jaipur, Tonk, Dausa, Dholpur, Karauli, Bharatpur and Alwar.
The current district of Jaipur lies in Eastern Rajasthan, in the Banas River basin and forms a part of Eastern Plain of Rajasthan.  The region is drained by a number of seasonal rivers of which Banganga, Dhundh and Bandi are prominent.

From the 10th century onwards, the…

This cultural centre for the city of Jaipur, is dedicated to the memory of India’s great leader Jawaharlal Nehru. Ideas for the building, sited in an open field near the university in a new part of the city, formed in Correa’s mind; but it was not until 1986 that the concept for the building was finalized.
CONCEPT:
The…

In the mandala, the outer circle of fire usually symbolises wisdom. The ring of eight charnel groundsrepresents the Buddhistexhortation to be always mindful of death, and the impermanence with which samsara is suffused: “such locations were utilized in order to confront and to realize the transient nature of life”.

This pairing of forms within a circle represents “a cosmic digram that reminds us of our relation to the infinite,  the world that extends both beyond and within our bodies and minds.

Symbolism relates to MANDALA tattoos . Drawing denotes Balance , perfection and Eternity as the distance  from its center to all points on it remains the same , from wherever it is measured  but the overall focus still remain on the mandala . Which happen to be the most prominent part of the design. The main purpose of this art is establishing visual balance.⁠⁠⁠⁠

Constructivist architecture was a form of modern architecture that flourished in the Soviet Union in the 1920s and early 1930s. It combined advanced technology and engineering with an avowedly Communist social purpose. Although it was divided into several competing factions, the movement produced many pioneering projects and finished buildings, before falling out of favour around 1932. It has left marked effects on later developments in architecture.

The first and most famous Constructivist architectural project was the 1919 proposal for the headquarters of the Comintern in St Petersburg by the Futurist Vladimir Tatlin, often called Tatlin’s Tower. Though it remained unbuilt, the materials—glass and steel—and its futuristic ethos and political slant (the movements of its internal volumes were meant to symbolise revolution and the dialectic) set the tone for the projects of the 1920s. 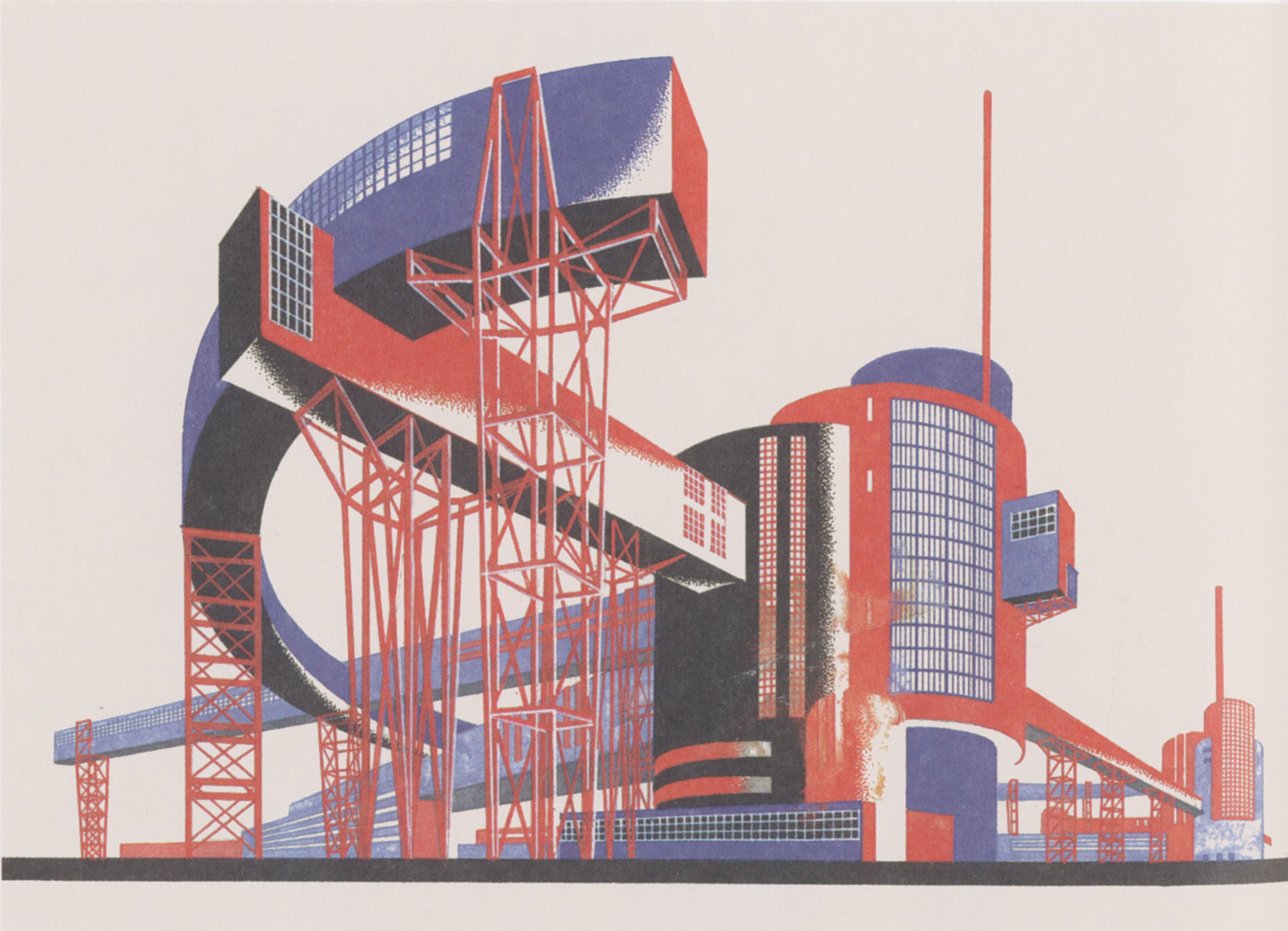 Following the 1917 Russian Revolution, the USSR became economically insecure and unable to embark on major construction projects. Nevertheless, avant-garde design schools began to encourage and inspire ambitious architects and urban planners, in particular the Association of New Architects (ASNOVA) which was established in 1921. 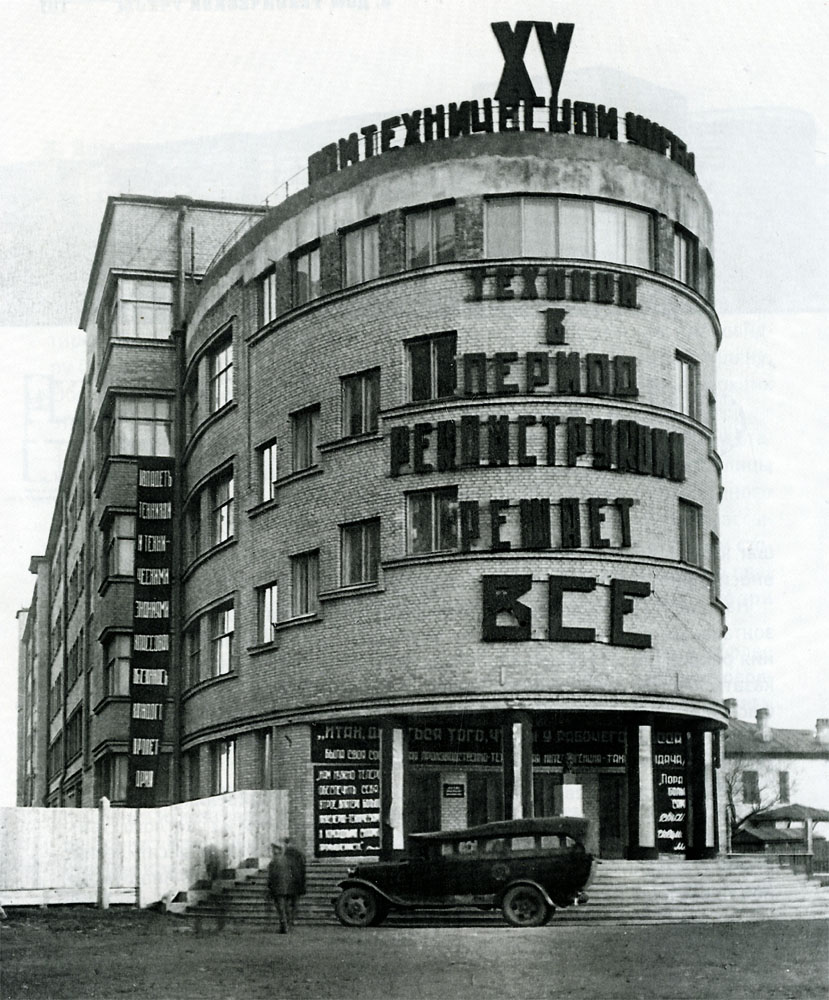 Constructivist architecture was used to build utilitarian projects for the workers, as well as more creative projects such as Flying City, that was intended as a prototype for airborne housing.

The main characteristic of constructivism was the application of 3D cubism to abstract and non-objective elements. The style incorporated straight lines, cylinders, cubes and rectangles; and merged elements of the modern age such as radio antennae, tension cables, concrete frames and steel girders. The possibilities of modern materials were also explored, such as steel frames that supported large areas of glazing, exposed rather than concealed building joints, balconies and sun decks.

The style aimed to explore the opposition between different forms as well as the contrast between different surfaces, predominately between solid walls and windows, which often gave the structures their characteristic sense of scale and presence.

The first and perhaps most famous project was one an unrealised proposal for Tatlin’s Tower, the headquarters of the Comintern in St. Petersburg. Many subsequent, ambitious projects were not actually built, but Russia’s fourth-largest city Yekaterinburg is regarded as a ‘Constructivist museum’ including 140 built examples of the form. Another famous surviving example is the social housing project Dom Narkomfin in Moscow. 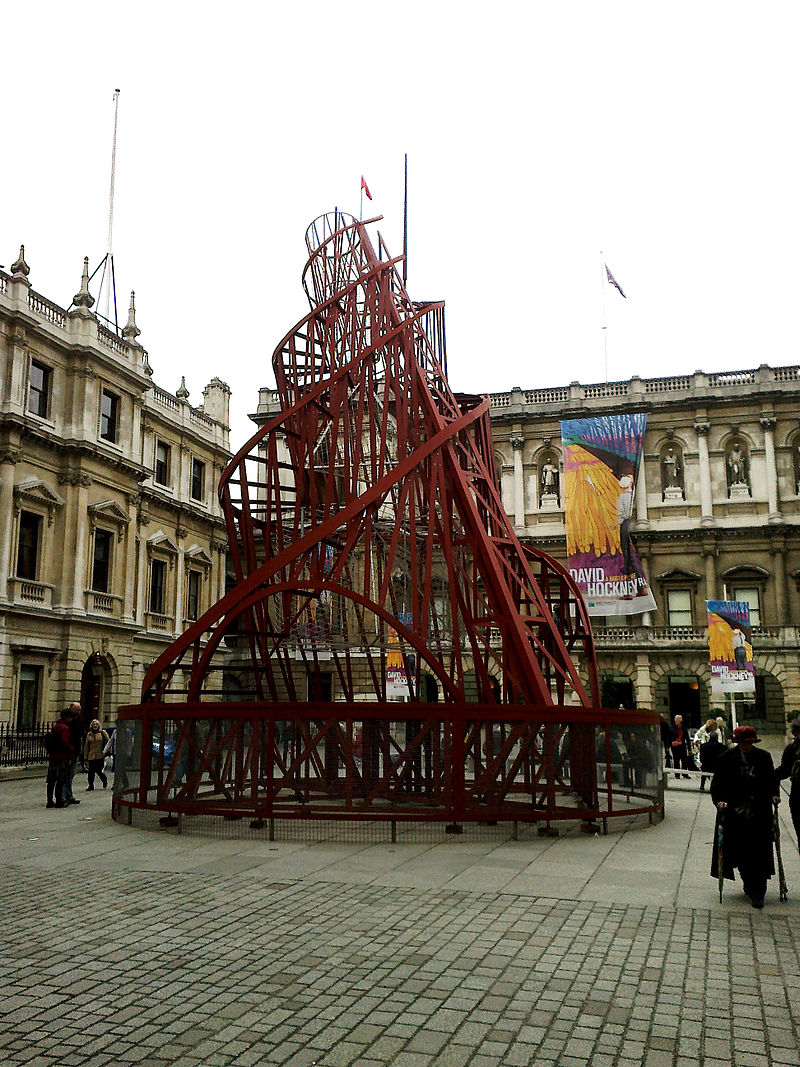 Tatlin’s Tower, or the project for the Monument to the Third International (1919–20), was a design for a grand monumental building by the Russian artist and architect Vladimir Tatlin, that was never built. It was planned to be erected in Petrograd (now St. Petersburg) after the Bolshevik Revolution of 1917, as the headquarters and monument of the Comintern (the third international).

Tatlin’s Constructivist tower was to be built from industrial materials: iron, glass and steel. In materials, shape and function, it was envisaged as a towering symbol of modernity. The tower’s main form was a twin helix which spiraled up to 400 m in height, around which visitors would be transported with the aid of various mechanical devices. The main framework would contain four large suspended geometric structures. These structures would rotate at different rates. At the base of the structure was a cube which was designed as a venue for lectures, conferences and legislative meetings, and this would complete a rotation in the span of one year. Above the cube would be a smaller pyramid housing executive activities and completing a rotation once a month. Further up would be a cylinder, which was to house an information center, issuing news bulletins and manifestos via telegraph, radio and loudspeaker, and would complete a rotation once a day.

At the top, there would be a hemisphere for radio equipment. There were also plans to install a gigantic open-air screen on the cylinder, and a further projector which would be able to cast messages across the clouds on any overcast day.

In 1565 a priest, Paolo Almerico, on his retirement from the Vatican , decided to return to his home town of Vicenza in the Venetian countryside and build a country house. This house, later known as ‘La Rotonda’, was to be one of Palladio’s best-known legacies to the architectural world.

The site selected was a hilltop just outside the city of Vicenza. Unlike some other Palladian villas, the building was not designed from the start to accommodate a working farm. This sophisticated building was designed for a site which was, in modern terminology, “suburban”. Palladio classed the building as a “palazzo” rather than a villa. 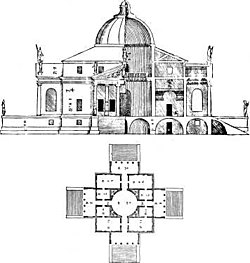 The design is for a completely symmetrical building having a square plan with four facades, each of which has a projecting portico. The whole is contained within an imaginary circle which touches each corner of the building and centres of the porticos. The name La Rotonda refers to the central circular hall with its dome. To describe the villa, as a whole, as a ‘rotonda’ is technically incorrect, as the building is not circular but rather the intersection of a square with a cross. Each portico has steps leading up, and opens via a small cabinet or corridor to the circular domed central hall. This and all other rooms were proportioned with mathematical precision according to Palladio’s own rules of architecture. 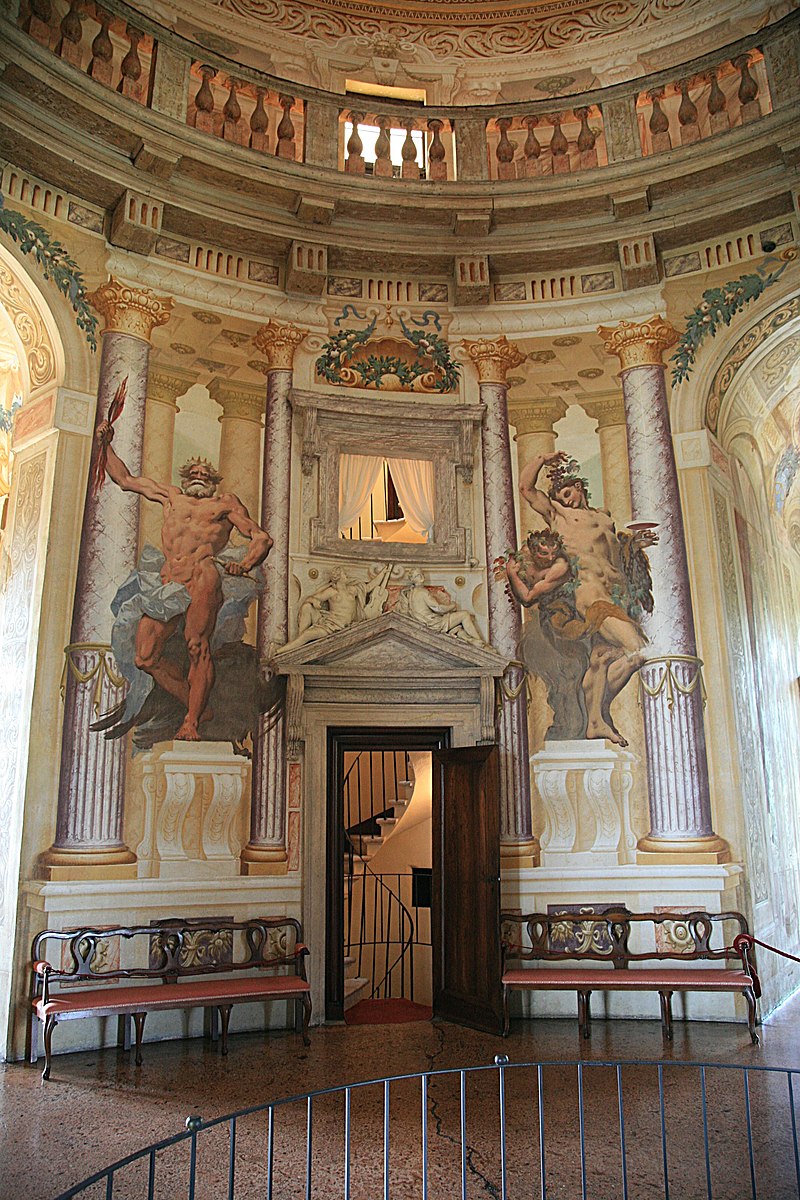 The interior design of the Villa was to be as wonderful, if not more so, than the exterior. Alessandro and Giovanni Battista Maganza and Anselmo Canera were commissioned to paint frescoes in the principal salons.

Among the four principal salons on the piano nobile are the West Salon (also called the Holy Room, because of the religious nature of its frescoes and ceiling), and the East Salon, which contains an allegorical life story of the first owner Paolo Almerico, his many admirable qualities portrayed in fresco.

The highlight of the interior is the central, circular hall, surrounded by a balcony and covered by the domed ceiling; it soars the full height of the main house up to the cupola, with walls decorated in trompe l’oeil. Abundant frescoes create an atmosphere that is more reminiscent of a cathedral than the principal salon of a country house. 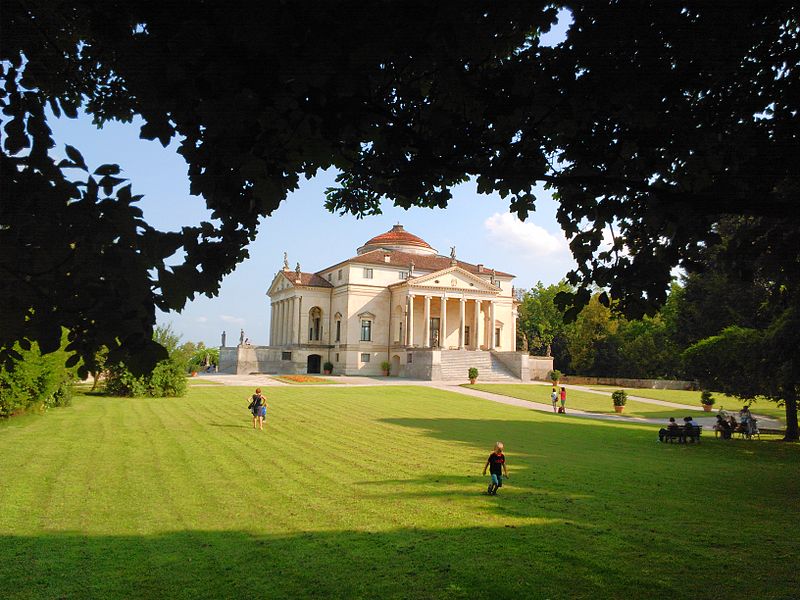 From the porticos, wonderful views of the surrounding countryside can be seen; this is no coincidence as the Villa was designed to be in perfect harmony with the landscape. This was in complete contrast to such buildings as Villa Farnese of just 16 years earlier. Thus, while the house appears to be completely symmetrical, it actually has certain deviations, designed to allow each facade to complement the surrounding landscape and topography. Hence there are variations in the facades, in the width of steps, retaining walls, etc. In this way, the symmetry of the architecture allows for the asymmetry of the landscape, and creates a seemingly symmetrical whole. The landscape is a panoramic vision of trees and meadows and woods, with the distant Vicenza on the horizon.